Okay, okay, I know I’ve mentioned Texas a lot lately. Bare with me ya’ll; it’s about to get a lot more Texas-y.

Texas isn’t the first state you think of when it comes to blues music, but a lot of great blues musicians hail from the state, nonetheless.

I completely blame the college radio station I listened to today for having such a cool blues program, and for playing this first song. Hearing the song naturally got me thinking about Texas musicians I dig, so I’m really innocent in the whole matter of letting my Texas freak flag fly. 😉

Steve Earle: Meet Me In The Alleyway

Steve Earle is kind of all over the place stylistically. Is he country/rock/blues? I think the fact that there’s no definitive answer is what’s cool about him and I love the gritty cadence of this song.

*Fun Fact from Steveearle.net: “Stephen Fain Earle was born on 17 January 1955 in Ft. Monroe, Virginia, where his father was stationed as an air traffic controller.  When Steve’s due date approached, a family member was selected and sent to Virginia with a small Prince Albert tobacco tin of Lone Star dirt from the family farm.  Grandmama said the dirt was spread in a flat pan and the little fellow was held up and his feet imprinted in the Texas dirt.  While the family had to accept that his birth certificate said Virginia,  Steve’s granddaddy and uncles were satisfied that the first soil his feet ever touched was Texan.”

I wrote a full post about Johnny when he died. The man just slayed on guitar and is arguably one of the best blues guitarists the world has ever known. My Mama saw him perform live, every chance she got.

Johnny and his brother Edgar with both born with albinism. Albinism: A group of genetic disorders in which there is partial or total lack of the pigment melanin in the eyes, skin, and hair.The condition also leaves albinos with severe vision problems.

The blues are great but I can’t write a Texas music post without mentioning Willie Nelson (aka the Redheaded Stranger). During his prolific and still active career, he has written around 2,500 songs, all while being super stoned! He wrote “Crazy” for Patsy Cline. The man is 81 and still touring.

I simply can’t pick a favorite song by Willie Nelson but I love “Blue Eyes Crying In The Rain”, “Funny How Time Slips Away”, and “Mamas, Don’t Let Your Babies Grow Up To Be Cowboys”.

I didn’t choose this song because it’s my favorite; I chose it because it’s written about a “town” that’s 10 minutes away from my hometown of Fredericksburg,Tx. The town consists of a general store, a post office, a dance hall, and a small outdoor stage. When I was a teenager, Willie held his annual 4th of July Picnic in this iconic place. You can still go there any day of the week and find musicians jamming together. It’s a really special place. Fun Fact: My sister became good friends with one of Willie’s granddaughters when she was a teenager and got to go on his tour bus. I’ve been jealous ever since.

Jim Reeves: He’ll Have To Go

The only reason I added this song is because I grew up hearing that this guy is my relative. I have no idea which side of the family connects me to him, and my dad was known to liberally create famous relatives out of thin air. FYI, I’m also supposedly related to Sir William Wallace (aka Brave Heart).

This is a photo of Jim Reeves. 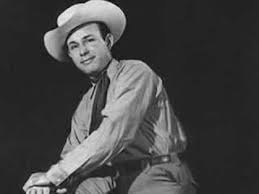 This is a photo of my Grandpa (Pappaw).

If a cowboy hat and some swagger counts as a resemblance, I guess I can see it!

There are many other Texas artists I could have included. Stevie Ray Vaughan almost made the list but that’s kind of a gimme.

What about ya’ll? Are there musicians from your home state that you feel a certain sense of pride for? Are you related to anybody famous?