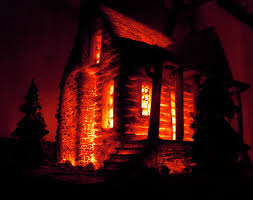 A few Falls back, I planned a romantic trip to the mountains of North Carolina. I’m a bargain shopper by nature, and spent countless hours searching for a cabin with all of the amenities, that wouldn’t break the bank.

I was woefully realizing that $250-$300 per night, was the going rate for the items on my checklist. Just as I was about to drop the deposit, a new listing popped up. As I scrolled through the photos, I heard the faint sound of harps, and almost had an out of body experience when I saw the price per night was a mere $140. Sold to the lady in whatever I was wearing!

The drive up to our modern cabin with panoramic views, was steep. The location was more isolated than we’d anticipated, and when we arrived at ‘our’ cabin, we realized we were perched at the very top of the mountain. I decided that the remote location was the reason for the low price.

As we began our walk-through, we were breathless, and it wasn’t just because of the altitude. Photos had not done this place justice. It boasted  a gourmet kitchen, soaking tub with jets and a hot tub on the on the huge porch (which was #1 on my list). Our dog Lucy was allowed to come along as well because the standard $200, non-refundable pet fee was not applied. We had hit the jackpot, and this place seemed too good to be true.

I noticed a few oddities on our first night. While I was preparing dinner on a gas range I’ll never be able to afford, a banging sound from within the cupboards kept interrupting me. I’d stop what I was doing and investigate, only to find a sound cupboard. The steak and sides were being assembled when I noticed a lone plate lying on the floor, in front of the cupboard that was producing the noise. I felt my first shudder then, but kept my mouth closed. Nothing was going to interrupt our much needed vacation.

While eating dinner, I couldn’t take my eyes off of Lucy the dog, who couldn’t take her eyes off of something. Lucy doesn’t growl, and she never barks but she was doing both simultaneously. She was positioned by the picture window, so I assumed she was picking up on some deer or raccoons we couldn’t see. I went to stand beside her at the window, and that’s when I realized she wasn’t looking out the window at all. Her gaze was fixated on the wall, and was accompanied by a low growl that could not be broken. D and I retreated to bed and tried to coax Lucy in with us, but she refused to budge. Lucy’s whole world revolves around being ‘under foot’. I trip over her daily, and can not leave a room without her following me. This night was different.

An excursion was planned for the following day, and it would have been much easier without a dog in tow. Lucy was not herself, so we agreed to bring her along. Somehow, we chose the wrong road that led to a scenic lookout . Our little truck clung to the edges of a steep goat-path and we were sure we were going to die. When we finally reached the entrance of the national park, the ticket taker was stunned by the path we’d chosen and  conveyed to us that ‘many folk’ had plummeted to their deaths along that stretch of road. She asked why we hadn’t taken the main road, and we sheepishly stammered : ‘Google maps’.

Night two approached in our stay at the ‘luxury cabin’.

The bubbles of the hot tub were heated as we popped open the bubbly. The view of the valley, was stunning. Each home’s glow was a dot among the pines that formed our very own, to scale , Lite-Brite. Derek stayed in the hot tub until he was a raisin and then went to bed. I felt the need to get my money’s worth, so I soaked a bit longer. As I soaked, strange shapes were flitting past my eyes. I was nowhere near drunk…just a glass of bubbly in. I told myself the shapes were bats or birds but their patterns were unidentifiable. A gray, swirling formation was teasing my peripheral, and for the first time, I felt threatened. It was time to go inside. Moving from the hot tub to the bedroom was just a few feet away but it felt like the bravest move I’d ever make. I maneuvered the space like a commando, and slept commando because any extra stop to put on my p.j’s, felt like it’d be the last task I’d ever perform. I clunkily, clambered in to bed, beside a sleeping Derek. The air in the room felt thick. My eyes were shut tight but sleep would not come.

Derek and I were at the halfway point of our drive back from the mountains when the topic of ‘the haunting’ even came up. It was kind of casual but went a little something like this: ‘Were you freaked out in the mountains?’ ‘Yes, I was’.

Derek went on to tell me that he felt his chest compress, while hearing his name spoken in to his face.  He further described the sensation of his limbs being strapped to the bed. I had experienced the ‘heaviness’ of the room as well, but I thought he was sleeping. He wasn’t sleeping, just frozen with terror.

Neither of us had brought up the creepiness because we didn’t want to dampen the vacation. Up until this point, Derek had lumped ghosts in w/ The Easter Bunny and Unicorns. This experience made him a true believer in the supernatural.

The rest of the drive back was filled with silence as we each ruminated over  the events.

Once safely back at home, we did some internet investigating, and discovered the area that we lodged in has the most documented ‘ghostly encounters’ of any region in our state.

I guess you get what you pay for.

9 thoughts on “The Cabin In The Woods: A Haunted Vacation”